The 2019 local elections will take place on June 30. President Ilir Meta decreed the date of the upcoming elections after consulting the leaders of the three major parliamentary groups: the Socialist, the Democrat and the Socialist Movement for Integration. The previous local elections were held on June 21, 2015. The amendments of the Electoral Code fulfilling the recommendations of the OSBE/ODIHR should be approved before the elections, as they are one of the key conditions for the opening of the negotiations with the EU.

Albania in 2019 is expected to further consolidate progress made on judicial reform, in particular, advancing the process of re-evaluating judges and prosecutors; strengthening the track record of proactive investigations, prosecutions and final convictions in the fight against corruption and organized crime, including high-level officials; as well as finalising within February the establishment of specialised bodies, namely the Special Anti-Corruption and Organised Crime Structure (SPAK) and National Bureau of Investigation (NBI) and Court.

The London Summit provided space for a meeting between Greek and Albanian prime ministers, Alexis Tsipras and Edi Rama. The two countries had discussed bilateral issues earlier in 2018 and used the Summit in London to announce the signing of “a new document of a strategic partnership” between Greece and Albania. Yet, this Strategic Partnership Agreement has not been signed yet. It is expected that such an agreement should be ratified in parliament at a time when Albania has a functional Constitutional Court.

Majlinda Bregu (Albania) is appointed the new Secretary General of the Regional Cooperation Council (RCC) beginning from January 1, 2019, replacing Goran Svilanović (Serbia) who took office on January 1, 2013. The 10th Annual Meeting of the RCC was held on April 23, 2018, endorsing the nominations of Majlinda Bregu as the next RCC Secretary-General for the term 2019-2021 and Igor Lukšić for the term 2022-2024.

The procedure to complete constitutional changes for FYR Macedonia is lengthy and requires for several rounds of voting at the national Parliament. The first round took place on October 19, 2018, and the procedure will be completed by January 2019 at the latest. The Parliament’s vote of last 19 October served to start the process of renaming the country ‘North Macedonia’, which constitutes a major step towards the ending of a two-decades-long stalemate with Greece, and opening up a door towards NATO and EU membership. A total of 80 MPs in the 120-seat national Parliament voted in favor of renaming the Balkan country the ‘Republic of North Macedonia’ – reaching so the two-thirds majority needed to enact the constitutional changes. The two countries reached the agreement on the name change in June 2018, but hurdles still persist before the change can be formalized. A referendum on the agreement held on September 30, 2018, failed to pass as the turnout threshold of 50% was not met, leaving so to the Skopje Parliament to settle the issue.

Romania will take over from Austria the Rotating presidency of the Council of the European Union from January 1, 2019, for the first time since it joined the Union in 2007. Romania will have a special role in creating conditions for discussions of the EU’s future post-Brexit and for the future relationship between the EU and UK. A critical date will be the Summit in the Transylvanian city of Sibiu in May 2019, where EU leaders are expected to reaffirm their commitment to the bloc. Whereas from July to December 2019, the EU presidency will go to Finland, which will focus on these priorities: strengthening of human rights and rule of law system in Europe; supporting equality and women’s rights; and openness and inclusion, as well as a particular focus on young people and prevention of radicalization.

The UK is expected to leave the European Union on March 29, 2019. The European Court of Justice ruled on December 10, 2018, that UK could cancel BREXIT without the permission of the other 27 EU member states, and remain a member of the EU on its existing terms, provided for the decision followed by a “democratic process”. This opens up the opportunity for another referendum, which is backed by some British MPs, who want the citizens to be given the final say on UK’s destiny, with the option to remain in the EU. On June 23, 2016, UK held the referendum deciding whether it should leave or not the Union, with the leave option winning by 51.9% to 48.1%. The referendum turnout was 71.8%, with more than 30 million people voting.

The European Commission will present on April 2019 its annual Enlargement Package, a set of documents explaining its policy on EU enlargement, including seven country reports assessing the state of play in each candidate country and potential candidate, what has been achieved over the last year and set out guidelines on reform priorities. The current enlargement agenda covers the Western Balkans Six countries and Turkey. Accession negotiations have been opened with three candidate countries, namely Montenegro (2012), Serbia (2014), and Turkey (2005). Macedonia is a candidate country since 2005 and Albania obtained candidate status in 2014. Bosnia and Herzegovina (application to join the EU was submitted in February 2016) and Kosovo (Stabilisation and Association Agreement entered into force in April 2016) are potential candidates. The previous enlargement package was published on April 17, 2018.

The General Affairs Council, composed of Ministers for Foreign and European Affairs from EU member states and the European Commission is going to hold the next meeting in June 2019. The Commission is represented by the Commissioner for inter-institutional relations, although it depends also on the matter discussed, The Council is expected to decide towards the opening of the accession negotiations with Albania and Macedonia, after the postponement of the decision on the progress made by the two countries on June 26, 2018. EU member states agreed on June 26, 2018, to delay the decision to officially start the accession talks with Macedonia and Albania until June 2019, on condition that the two Balkan countries enhanced their EU reform agendas. The EU Ministers were entangled in a bitter debate over the opening of the negotiations, as France and the Netherlands, backed by Denmark, continued to oppose on issuing the green light to these countries and sought for further steps in tackling corruption and organized crime.

The 6th Western Balkans Summit will be held in Poznań, Poland in July 2019. Next year Poland celebrates its 15th anniversary of accession to the EU and symbolically the summit will be organized in the city of Poznań. The Summit is held in the frame of the so-called Berlin Process and it aims to keep the momentum of the accession process and raise the visibility of the region in a period of European Elections and establishment of the European Commission, sending so a strong signal the new EU institutions. Furthermore, the chairmanship of a Central Eastern European country is considered as an added value for the Western Balkans, as Poland has previously experienced the process of EU accession, and Visegrad Group illustrates a successful model of regional cooperation. The novelty of the summit’s agenda is the focus on the cultural dimension and connectivity between the countries of the region. 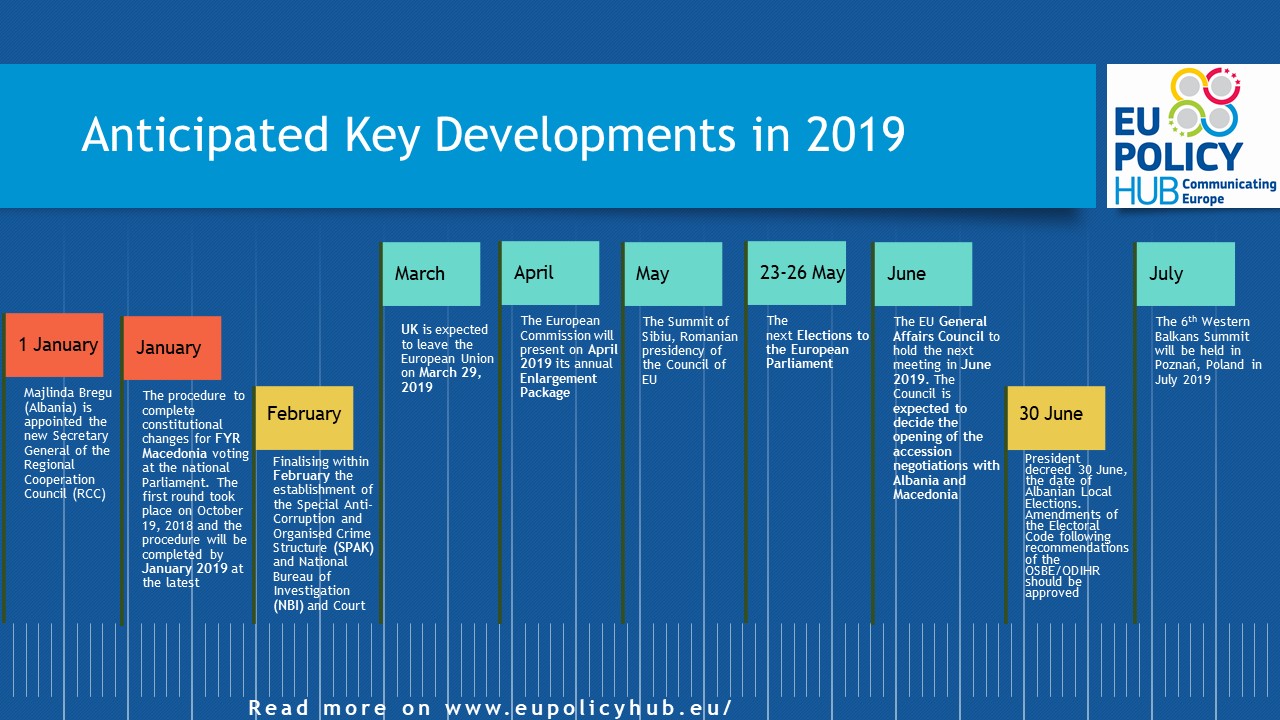 Create a custom menu under "Appearance => Menus" in your WordPress dashboard to display social icons in this widget.